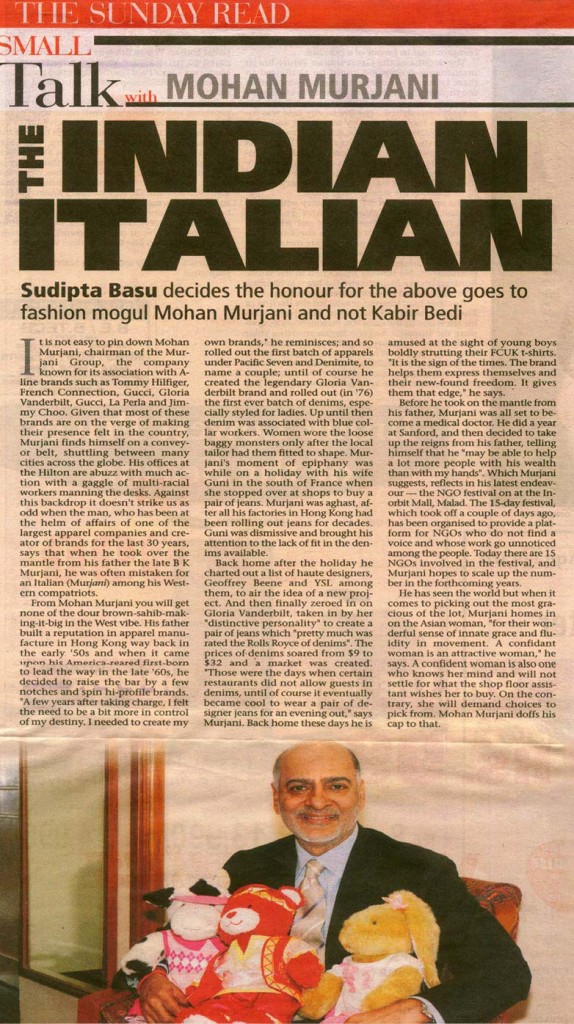 It is not easy to pin down Mohan Murjani, chairman of the Murjani Group, the company known for its association with A-line brands such as Tommy Hilfiger, French Connection, Gucci, Gloria Vanderbilt, Gucci, La Perla and Jimmy Choo. Given that most of these brands are on the verge of making their presence felt in the country, Murjani finds himself on a conveyor belt, shuttling between many cities across the globe. His offices at the Hilton are abuzz with much action with a gaggle of multi-racial workers manning the desks. Against this backdrop it doesn’t strike us as odd when the man, who has been at the helm of affairs of one of the largest apparel companies and creator of brands for the last 30 years, says that when he took over the mantle from his father the late B K Murjani, he was often mistaken for an Italian (Murjani) among his Western compatriots.

From Mohan Murjani you will get none of the dour brown-sahib-making-it-big in the West vibe. His father built a reputation in apparel manufacture in Hong Kong way back in the early ’50s and when it came upon his America-reared first-born to lead the way in the late ’60s, he decided to raise the bar by a few notches and spin hi-profile brands. “A few years after taking charge, I felt the need to be a bit more in control of my destiny. I needed to create my own brands,” he reminisces; and so rolled out the first batch of apparels under Pacific Seven and Denimite, to name a couple; until of course he created the legendary Gloria Vanderbilt brand and rolled out (in ’76) the first ever batch of denims, especially styled for ladies.

Up until then denim was associated with blue collar workers. Women wore the loose baggy monsters only after the local tailor had them fitted to shape. Murjani’s moment of epiphany was while on a holiday with his wife Guni in the south of France when she stopped over at shops to buy a pair of jeans. Murjani was aghast, after all his factories in Hong Kong had been rolling out jeans for decades. Guni was dismissive and brought his attention to the lack of fit in the denims available.

Back home after the holiday he charted out a list of haute designers, Geoffrey Beene and YSL among them, to air the idea of a new project. And then finally zeroed in on Gloria Vanderbilt, taken in by her “distinctive personality” to create a pair of jeans which “pretty much was rated the Rolls Royce of denims”. The prices of denims soared from $9 to $32 and a market was created. “Those were the days when certain restaurants did not allow guests in denims, until of course it eventually became cool to wear a pair of designer jeans for an evening out,” says Murjani. Back home these days he is amused at the sight of young boys boldly strutting their FCUK t-shirts. “It is the sign of the times. The brand helps them express themselves and their new-found freedom. It gives them that edge,” he says.

Before he took on the mantle from his father, Murjani was all set to become a medical doctor. He did a year at Sanford, and then decided to take up the reigns from his father, telling himself that he “may be able to help a lot more people with his wealth than with my hands”. Which Murjani suggests, reflects in his latest endeavour — the NGO festival on at the Inorbit Mall, Malad. The 15-day festival, which took off a couple of days ago, has been organised to provide a platform for NGOs who do not find a voice and whose work go unnoticed among the people. Today there are 15 NGOs involved in the festival, and Murjani hopes to scale up the number in the forthcoming years.

He has seen the world but when it comes to picking out the most gracious of the lot, Murjani homes in on the Asian woman, “for their wonderful sense of innate grace and fluidity in movement. A confidant woman is an attractive woman,” he says. A confident woman is also one who knows her mind and will not settle for what the shop floor assistant wishes her to buy. On the contrary, she will demand choices to pick from. Mohan Murjani doffs his cap to that.