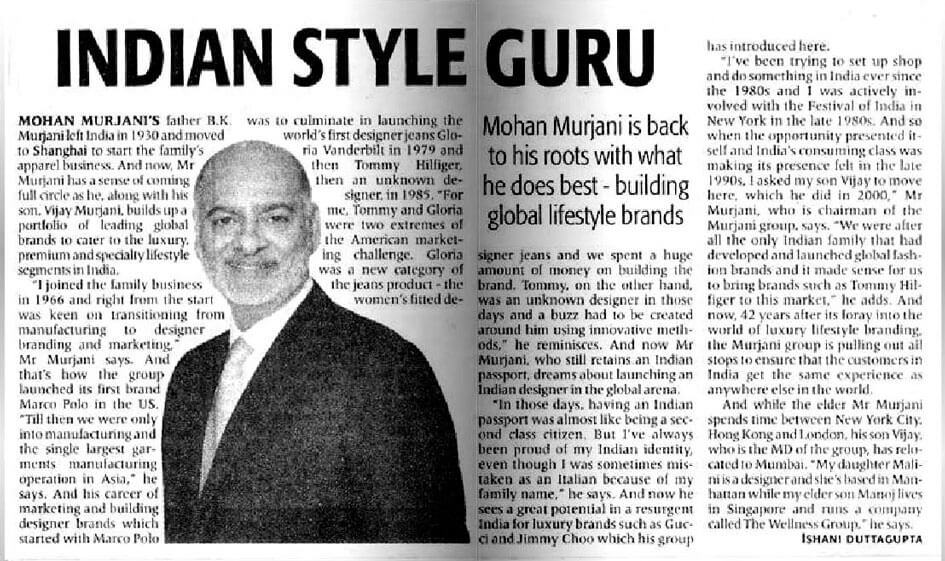 Mohan Murjani’s father B.K. Murjani left India in 1930 and moved to Shanghai to start the family’s apparel business. And now, Mr Murjani has a sense of coming full circle as he, along with his son, Vijay Murjani, builds up a portfolio of leading global brands to cater to the luxury, premium and specialty lifestyle segments in India.

“I joined the family business in 1966 and right from the start was keen on transitioning from manufacturing to designer branding and marketing,” Mr Murjani says. And that’s how the group launched its first brand Marco Polo in the US. “Till then we were only into manufacturing and the single largest garments manufacturing operation in Asia,” he says. And his career of marketing and building designer brands which started with Marco Polo was to culminate in launching the world’s first designer jeans Gloria Vanderbilt in 1979 and then Tommy Hilfiger, then an unknown designer, in 1985.

“For me, Tommy and Gloria were two extremes of the American marketing challenge. Gloria was a new category of the jeans product – the women’s fitted designer jeans and we spent a huge amount of money on building the brand. Tommy, on the other hand, was an unknown designer in those days and a buzz had to be created around him using innovative methods,” he reminisces. And now Mr Murjani, who still retains an Indian passport, dreams about launching an Indian designer in the global arena.

“In those days, having an Indian passport was almost like being a second class citizen. But I’ve always been proud of my Indian identity, even though I was sometimes mistaken as an Italian because of my family name,” he says. And now he sees a great potential in a resurgent India for luxury brands such as Gucci and Jimmy Choo which his group has introduced here.

“I’ve been trying to set up shop and do something in India ever since the 1980s and I was actively involved with the Festival of India in New York in the late 1980s. And so when the opportunity presented itself and India’s consuming class was making its presence felt in the late 1990s, I asked my son Vijay to move here, which he did in 2000,” Mr Murjani, who is chairman of the Murjani group, says.

“We were after all the only Indian family that had developed and launched global fashion brands and it made sense for us to bring brands such as Tommy Hilfiger to this market,” he adds. And now, 42 years after its foray into the world of luxury lifestyle branding, the Murjani group is pulling out all stops to ensure that the customers in India get the same experience as anywhere else in the world.

And while the elder Mr Murjani spends time between New York City, Hong Kong and London, his son Vijay, who is the MD of the group, has relocated to Mumbai. “My daughter Malini is a designer and she’s based in Manhattan while my elder son Manoj lives in Singapore and runs a company called The Wellness Group,” he says.