NEW YORK — For a designer, nothing says you’ve made it quite like a flagship on Fifth Avenue and after nearly 25 years in business, Tommy Hilfiger’s 22,000-square-foot store at 681 Fifth Avenue opening today clearly conveys the message he’s arrived.

“This is a pinnacle moment because everything seems to be working,” the designer said at the four-level flagship, where construction workers rushed over the weekend to put the finishing touches on the facade, dressing rooms and displays. “I remember that Avis tag line, ‘We Try Harder.’ I believe my team tries harder. For a while we were the underdogs. Now, we’re breaking loose with a lot of momentum.”

The flagship cost “in the tens of millions” to build, Hilfiger said, adding the final figure could grow since “all the bills haven’t come in yet and we’ve been paying people a lot of overtime.”

According to a June survey by the Real Estate Board of New York, the average asking rent along Fifth Avenue between 49th and 59th Streets, was $1,631 a square foot. Hilfiger signed the lease in spring 2008 after searching for a flagship location since 2006, when the company was bought by venture capital firm Apax Partners.

“In the early stages, we weren’t looking at this particular location and this particular size,” said Fred Gehring, chief executive officer of Tommy Hilfiger. “We were a little less courageous. We were just coming out of a reorganization. We were looking at lower Fifth Avenue, near 49th Street or further south. Financially, it was less intimidating. As our reorganization and brand development progressed really well, we gained more confidence and started to look on [the prime part] of Fifth Avenue.”

Gehring estimated the store will do $1,000 a square foot in sales, or about $22 million a year.

“We wanted this to be our global flagship, our stage to the world,” Hilfiger said. “We’re set up to do a lot of business. We’ve also set up [the store] as an image vehicle. Our success in Europe is such that it dictated that we have a global flagship.”

Had he known the economy was headed south, Gehring said he would still have signed the lease.

“You take a store like this for the long run,” he said. “It’s a very strategic initiative. You can wonder had we waited a year whether we might have been able to sign a slightly more favorable lease. This is a real anchor presence for our brand globally. We are entering into it wholeheartedly and enthusiastically. We aren’t cutting any corners.”

Nonetheless, Gehring said the size of the Fifth Avenue flagship won’t likely be replicated anywhere else in the world. “We cannot see any other city around the world where we would do this,” he said. “We’d be interested in doing larger concept stores, maybe go from 5,000 or 6,000 square feet to 8,000 or 9,000 square feet.

“We’re looking at different concepts to have on the shelf,” he said. “It may be with our brand or maybe with some new brand [we develop]. Hilfiger Denim may be something we might expand.” 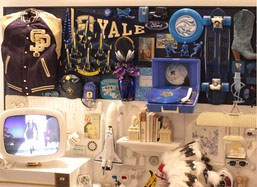 The company counts nearly 1,000 stores worldwide. About 50 percent of the stores are directly owned and operated. The Fifth Avenue flagship brings the U.S. store count to 11. But given the economy, Gehring said the company is slowing the pace of its store openings from 100 units last year to 60 in 2010. 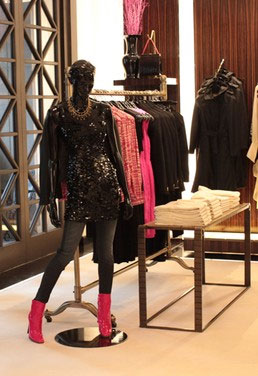 As for the initial public offering that had once been expected but put off because of the market downturn, Gehring said, “One day we probably will go ahead with an IPO. It’s not really on our radar today, not because we don’t want to, but because there’s no market. We’re very healthy and owned by a private equity group that will eventually have to do an exit. There’s no rush and I don’t get any pressure. It may take another two years.”

Hilfiger’s visual staff sweated over every last detail in the flagship, from the hand-painted toille wallpaper in the men’s and women’s dressing rooms to the eclectic array of furniture that was purchased from eBay, the Brimfield, Mass. antiques show, and custom-made for the store. There’s custom clothing at the flagship as well, Hilfiger said, citing hand-tailored suiting for men, and sweaters exclusive to the store. Also unique to the location is Tommy Hilfiger Fifth Avenue Pink Collection — pink women’s outerwear, knitwear, dresses, hats, scarves, gloves, watches, belts, and gifts, and select pink men’s knitwear and ties. Additional special products for men focus on plaids.

Hilfiger described the progression of the store and its vibe as “grittier and more streetwise in the basement, where Hilfiger Denim is housed, becoming increasingly refined and sophisticated as you walk up to the fourth floor,” where the runway collection is housed.
The flagship, designed by Callison Architects and the Tommy Hilfiger creative team, was formerly occupied by Fortunoff and was originally designed by McKim, Mead and White. It takes Hilfiger’s traditional American iconography and presents it in new and unexpected ways. For example, a large mixed media art installation on a wall leading up the staircase represents a 3-D abstract American flag with an array of red, white and blue items, both trash and treasures. There’s a blue Cadillac fender and blue surf board, red Marshall amp, white vintage Sixties television monitor and an old ice skate. 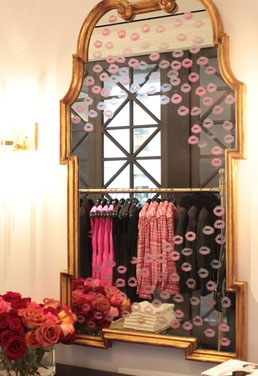 Rough-hewn material such as unfinished wood tables contrast with elegant Venini chandeliers. A curved floating staircase with a glass railing and flourescent-lighted steps doubles as a viewing platform for revolving art exhibits. Floors of black Brazilian cherry wood play off walls variously painted hot pink, cream and royal blue. Doors on the fourth floor lead to a balcony overlooking Fifth Avenue and decorated with box shrubs and other plantings. Lipstick-kissed mirrors are scattered throughout the floor. A black patent leather sofa sits on an overdyed Persian rug. Vintage clothing is interspersed with runway pieces. An Oscar de la Renta navy and white dress and matching coat from the Sixties hangs near other navy and white garments. There’s a pink satin Hilfiger sheath, $498 and a leather trench, $1,100.
The third floor features a wall display of vintage state plates from all 50 states. Women’s sportswear is displayed on found pieces, such as a table sprayed a high gloss coral. Prices for women’s sportswear range from $28 for knits to $328 for outerwear. 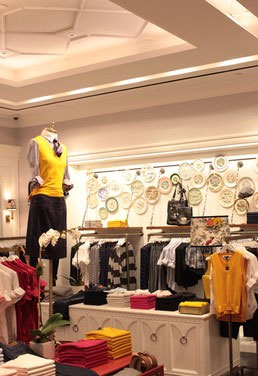 The second floor men’s wear area is decorated with an art installation of hand-wrapped arrows piercing tree stumps painted pink. Feathered Indian headresses sit on several display tables. The American Indian theme continues on the ground floor, where an Indian motorcycle stands sentry. There are also old motorcycle helmets and a wooden sculpture shaped like a hand that holds a mannequin in its palm. Hilfiger said special services at the store include shoe shining and tailoring. Men’s sportswear is priced from $49.50 for shirts to $600 for outerwear.

The sound system plays “great American classics,” including Hilfiger favorites such as “Bob Dylan, the Doors and Hendrix. I also like Sinatra and Muddy Waters. We may have a DJ come to the basement on Saturdays.”

The opening of the store marks another step in Hilfiger’s U.S. comeback. A deal to sell exclusively to Macy’s, which began last September, was the “best move we made in the American market,” Hilfiger said. “Macy’s worked out better than anyone expected. We were in many different department stores but not in a significant way. There were inconsistencies with the set-ups. Sometimes the stores bought the entire line and sometimes they bought only the jeans. We feel very strongly about Macy’s and what they’ve done.”

Asked whether the company is considering an exclusive Macy’s deal for Karl Lagerfeld — Tommy Hilfiger Corp. in 2004 bought Lagerfeld’s ready-to-wear and accessories collections — Hilfiger said there’s nothing happening at the moment. “We’ve talked about putting Karl into department stores in America,” he said. “We’re now working on building the brand in Europe. We tried it here a few years ago and it was too early. The product was too sophisticated for the market. We did an eyewear license and reestablished the fragrance license and even did a teddy bear license. He’s like a rock star.”

But the brand hasn’t been growing only in the U.S.; it also continues to perform strongly in Europe. For the year ended March 31, Tommy Hilfiger had sales of 1.6 billion euros, or $2.3 billion at current exchange, a 21 percent increase over the previous year.

“We’ve had such a turnaround in the U.S. and such a continued growth path with men’s, women’s and children’s,” Hilfiger said.

That wasn’t always the case. In 2003, Hilfiger decided to close 38 specialty stores and shuttered large glitzy flagships in London and on Rodeo Drive in Beverly Hills. The designer’s core men’s wear brand was battling market erosion and his products were over-exposed in department stores.
Gehring said the Rodeo Drive store was “completely opposite of what the brand was about. It had developed into a very popular, young, streetwear and urban brand.” The London Bond Street flagship’s size was simply out of proportion to Hilfiger’s business and recognition in the U.K. “We had just started the European business,” he said, adding “The brand’s positioning today is vastly different.”

As he surveyed the Fifth Avenue store’s soaring space, Hilfiger said, “Timing is everything. This is really where our customer lives and breathes. We thrive on international traffic. In the past when we opened in an area that didn’t work, we made the decision to close and move on. In 25 years, we’ve never been 100 percent, but we’re more right than wrong.”