Mohan Murjani made a fortune in the U.S. when he created Gloria Vanderbilt jeans and backed designer Tommy Hilfiger. The he lost it. Today he is rebuilding his empire in the high-end retailing boom sweeping the country he left 50 years ago: India. In the 1980s, amid a sharp downturn in his fortunes, one of the few assets Mr. Murjani held onto was the rights to sell Tommy Hilfiger products in India – even though imported jeans were effectively banned in the country then. He did nothing with it for a decade. But India’s economic boom and the expansion of its companies overseas have created a new class of consumer that has money and cares about global brands.
To tap that market, Mr. Murjani, with local partners, in 2004 opened India’s first Tommy Hilfiger store. Though its jeans cost $100 – about as much as two month’s salary for most Indians – it was a hit. Mr. Murjani has since opened nine more standalone Tommy Hilfiger stores and sells Tommy products in hundreds of other shops. This year, he plans to open another 10 stores as he expands the brands he sells in India to include Gucci, Jimmy Choo, Calvin Klein and Britain’s trendy French Connection. 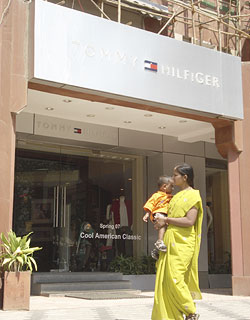 These are just some of the many higher-end global brands catching on here. In Mumbai, Versace sells $100 T-shirts. New malls stock Swarovski crystals and, in one case, a Rolls-Royce dealership. One of Bollywood’s biggest stars, Shahrukh Khan, in “brand ambassador” for Tag Heuer watches, which cost thousand dollars. He gives them away on the Indian version of “Who wants to be a Millionaire?”

The rise of up market international brands here parallels India’s emergence as an economic force world-wide. For decades after it gained independence from Britain, India’s economy was geared more toward socialism than capitalism and Indians stuck to their traditional unique dress and culture. Foreign brands typically were limited to the lobbies of the nation’s few five-star hotels.

I’ve always wanted to come to India, but the market wasn’t there, the consumers weren’t there; India didn’t really have a brand culture,” says the 60-year old Mr. Murjani, who left India when he was 10.

All that changed with economic overhauls in the early 1990s, followed by the emergence of India’s high-technology and services sector. India’s software companies hit it big preparing computer systems world-wide for the switch to the new millennium. Its outsourcing companies are prospering with business form overseas.

Young workers, many of them making more money than their parents and getting raises 15% or more a year, seek the same internationally recognized, designer products they can purchase on work trips and vacations abroad. They watch MTV. They read fashion magazines. They see top Bollywood stars switching to Western designer dresses; many of its biggest female stars arrived at an awards ceremony last month in gowns rather than saris. These consumers also aren’t reluctant to use plastic: Credit-card loans in India have risen by 30% a year for the past five years.

Rani Desai, a 26-year-old research analyst for a think tank in Mumbai, likes to carry designer bags and wear shoes that cost more than her monthly salary, a taste she acquired while studying in London. Her recent purchases include a pair of Gucci shoes with 10 centimeter heels and the latest Louis Vuitton handbag. She has already spotted her next purchase in a magazine. It is a Burberry bag that she can pick up in Mumbai. “i haven’t seen the bag in person yet,” she says.

Though much of the most is covered by her parents, she says such are a necessity if she wants to stand out. “A 30,000-rupee [$690] bag is not that difficult for the upper middle class to buy,’ she says.”So everyone and their dogs started carrying them.” 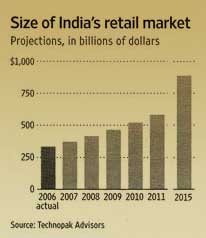 India’s overall retail market is already the eighth-largest in the world, says Mckinsey & Co. While it has more than $300 billion a year in sales, according to Technopak Advisors, a New Delhi based research group, the vast majority of sales still come from the millions of tiny mom-and-pop shops that sell Indian-made products. Sales from chains of branded stores still account for less than 5% of the total. But analysts foresee vigorous growth, especially from high-end retail.

Designers and other higher-end brands have taken off, even as other foreign retailers remain largely closed out. The government has prevented companies like Wal-Mart recently firmed up plans to enter India through a joint venture, but it will only be allowed in as a wholesaler; its Indian partner will own the stores.

That was the case for single-branded stores too for years, forcing the Murjani family and others to fine local partners. Recently, though, regulations have relaxed to make it easier for these retailers. Last August, French luxury-goods brand Louis Vuitton, which has operated here since 2002 and is part of LVMH Moet Hennessy Louis Vuitton SA, became one of the first brands to own a majority stake in its Indian distributor. Vuitton’s sales in India grew 50% last year. The Murjanis says that in the future they will own all the stores they open.

For Mr. Murjani, the arrival of foreign designer labels in India is a fitting coda to the family’s history over the past six decades.

When Pakistan split from India in 1947, the family fled its ancestral home in what is now Pakistan. His father, B,K Murjani, left Mohon in India and went to Hong Kong to start his own business. He was one of the first to export clothes from China to the U.S. in the 1950s, at one point of sending 10 million pieces a year to the U.S. company S.S. Kresge, which later became Kmart, says Mohan Murjani.

Mohan Murjani attended Babson College in Massachusetts and then entered the family business with a view to expansion. His big idea was to make and market jeans fitted for women and branded with a socialite’s name: Gloria Vanderbilt. They sold for $32 a pair when the average cost of a Levis was less then $10. The jeans brought in as much as $500 million in sales in some years during the 1970s. Mr. Murjani became a minor celebrity in his new home in New York, occasionally singing karaoke with Andy Warhol, he says.

In the early 1980s, Mr. Murjani decided to create a jeans brand for men. He helped launch Tommy Hilfiger with a giant billboard in Times Square and bought the rights to Hilfiger sales world-wide. But then Mr. Murjani over invested in a Coca-cola line of clothes and in a new chain of high-tech clothing stores called “Fizzazz” that fizzled. The stock-marked carsh of 1987 left Mr.Murjani with warehouses full of unsold inventory and struggling to pay his suppliers and lenders. “We had stretched ourselves and then the market went bad,” he says.

Twelve years later, he sent his son Vijay to scope out the Indian retail market. The elder Mr. Murjani says he moved back to India this year to help out, though he and his wife are shuttling between Mumbai, London and New York.

It took the younger Mr. Murjani three years of planning, research and battling with the Indian bureaucracy before he could open the first store. With limited people with experience in high-end retail in India, he brought in specialists from abroad and from other industries like hotels and airlines. The government made the cost of doing business steep; It slaps a 35% tariff on most garment imports.

When the first Hilfiger store opened in 2004, it carried the most expensive jeans in India, at more than $100 a pair, Vijay Murjani says. The 180-square-meter store format the Murjanis chose was unheard of at the time. The largest brand stores that existed at the time were half that size. “People thought we were crazy,” says Vijay Murjani. “They were, like, ‘What are you going to fill them with?'”

The answer, says father; exactly the same products, atmosphere and prices as consumers would find in a Tommy Hilfiger store in New York or Chicago. If the products are too expensive, the stores too small or shabby or the selection outdated, then high-end Indian shoppers will just wait until they go abroad, he says.

“Indian consumers with all the media that is available to them the Internet, magazines, television they know exactly what the latest products are in the world; they are totally up to speed,” Mr. Murjani says.

Hilfiger dressing rooms in Indian stores have heavy doors massive framed mirrors, just like the stores in the U.S. The shopping bags and paper used for receipts are identical. For the new French Connection store in Mumbai, the Murjanis have imported the jeans shelves, indoor billboards and even the mannequins to get the same edgy look that makes the chain popular in Europe.

They have made some adjustments. With some Hilfiger branches attracting more than 4,000 customers a day, the signature teakwood floors were getting ground down. “We are switching to stone now,” says Vijay.

While the Murjanis won’t disclose details, they say their Tommy Hilfiger business is profitable. Mr.Murjani says the government’s tariff on foreign clothes shrinks profit margins since the clothes are sold at close to the same prices as in London, New York or Singapore. He wouldn’t be specific on revenues, but says that sales at some Tommy Hilfiger stores in India more than doubled last year.

The Hilfiger stores cater to the likes of Sudipt Sankar Ghosh, a 25 year who buys Tommy Hilfiger regularly because he likes the shops and thinks the quality of the clothing is better than Indian-made. He exports Indian made clothing to other retail stores in the U.S. (Hilfiger clothes are made in countries including Turkey, China and the U.S. with a small percentage made in India.)

“I’m a guy who is brand conscious,” he said, stepping out of a suburban New Delhi Hilfiger outlet one recent Sunday in a pale blue polo shirt with the red, white and blue Tommy Hilfiger logo. “i don’t care about the price,” he added, as his girlfriend looked on. “I can afford it.”

One of the Murjani family’s next projects is to bring Tommy Hilfiger, Calvin Klein and French Connection to the new 150-store, 2 1/2 hectare “Select Citywalk,” a $150 million shopping complex under construction in New Delhi.

Recently, the complex was filled with hundreds of workers and donkeys scrambling to finish by a May deadline. Construction workers were mixing concrete by hand in the future French Connection store and there was a big puddle in Tommy Hilfiger’s space.

When finished, there will be a gourmet grocery store, an Italian restaurant, a pub and one of India’s first Starbucks, says the complex’s general manager Shilpa Malik. Its food court will feel like a hotel lobby, with solid furniture – “none of those plastic chairs,” she says and spots to eat outside to enjoy the view of a two hectare park that fronts the project and covers its 2,000 car garage. At the center of the complex is a dome which will have a separate entrance, exclusively for luxury retailers.

The Murjani brands will be competing with other international retailers including Mango, Nine West, and Clinique. “India has never seen all these brands under one roof,” says Ms. Malik.- Christina Passiarello contributed to the article.